Unsecured Truck Cargo Can Cause Accidents and Injuries 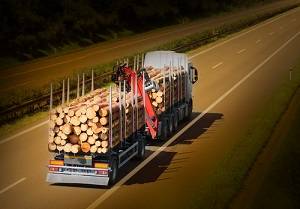 Earlier this winter, two semi-trucks collided near Sunol, causing one truck’s load of lumber to spill onto the road. Fortunately, no one was injured in the accident, although it took crews seven hours to remove the trucks and debris so that the road could be safely cleared and re-opened.

Semi-trucks are responsible for transporting tens of thousands of different products every year, including everything from food and clothing to lumber and toxic chemicals. Because cargoes are so heavy and often consist of dangerous materials, both federal and state law regulate how cargoes are to be secured and transported safely. California law requires drivers to:

State regulations require truck drivers to inspect their vehicles pre-trip to ensure that the vehicle is not overloaded and that any cargo is properly balanced and secured. However, a driver’s inspection duties do not cease once the trip starts. Drivers are required to inspect any cargo within the first 50 miles of departure in order to make any needed adjustments. After driving for three hours or 150 miles, whichever comes first, drivers are directed to check the security of their cargo a third time.

The Federal Motor Carrier Safety Administration (FMCSA) created an additional set of cargo securement rules, which govern the loading and securing of cargo that is transported across state boundaries. These rules require that cargo be secured with strong tiedowns or similar equipment and that any cargo that is likely to shift during transport be restrained by wedges that will not become unfastened during the drive. Furthermore, any cargo packed next to each other and secured with tiedowns must be:

Because some of the cargoes transported by truck are extremely heavy or dangerous, such as logs, concrete pipes, and toxic materials, injuries sustained in accidents in which a truck spilled its cargo are especially devastating. Both federal and state regulations are designed to protect against these occurrences, so a driver’s negligence in failing to inspect the security of a load or to properly load it in the first place may open him or her up to liability for the injuries the accident caused. If the truck itself was damaged, and its malfunctioning caused the accident and subsequent spill, the owners may also be held liable. Finally, if the equipment used to secure the cargo was improperly manufactured, the product’s maker may be held responsible.

If you or a loved one has been injured by negligently loaded cargo, you may be entitled to compensation for your losses, which includes medical costs, lost wages, and pain and suffering. Please contact the caring Monterey truck accident lawyers at Corsiglia, McMahon & Allard, L.L.P. for a free consultation.