Woman Injured After Being Dropped by Airline Employee 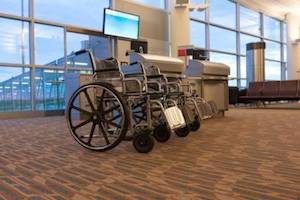 A Florida woman is suing United Airlines after being injured by an employee attempting to transfer her from her wheelchair to a seat. The woman has a debilitating disability that leaves her confined to a wheelchair. She was on her way to Austin from Tampa to visit family last September, and the incident happened at a layover in Houston.

An Unfortunate Accident or Airline Negligence?

According to the lawsuit, the United Airlines employee lifted the woman from her wheelchair in order to place her into the passenger seat when he lost control and dropped her. The woman told news outlets, "He kept saying, 'Don't worry, I got you.' …I put my trust in him, but I saw the look of panic in his face when he knew he was going to drop me and it was terrifying."

The woman landed on her shoulder causing serious damage to it in addition to torn muscles in her arm and other contusions on her body. She required surgery on her right shoulder and now says she has lost function in her right arm.

To add insult to injury, the woman also claims that her wheelchair itself was not properly cared for during the trip. It is now unusable after being crushed under her. United Airlines has agreed to reimburse the injured woman for the cost of repairing or replacing the wheelchair but an agreement regarding medical treatment reimbursement has not been reached. The lawsuit could not come at a worse time for United Airlines. After a video surfaced of a man being forcibly removed from a plane in April, the airline has been under national public scrutiny.

Airplane-Related Accidents Can be Serious

Flying is a nerve-wracking ordeal for many Americans. The fear that the plane is going to crash is often the first on a mental list of worries when flying but other injuries are much more common. Injuries can be sustained while embarking and disembarking the plane—especially if ice, oil, or other slippery substances are present near the entrances and exits. Passengers can also be injured by baggage falling from the overhead compartment, food carts incidents, and turbulence. As recent events have shown, a person could also be hurt as the result of actions taken by airline personnel, airport staff, or security officers.

As with any type of accident, you may be entitled to collect compensation if you have been injured as the result of another party’s actions or negligence on an airplane. Proving your case, however, can be difficult, and the help of a knowledgeable lawyer can be invaluable. If you or a loved one has been injured in an incident related to air travel, contact an experienced San Jose personal injury attorney to discuss your case. Call (408) 289-1417 for a free consultation with Corsiglia McMahon & Allard, L.L.P. today.