The Truth About Texting and Driving in the United States 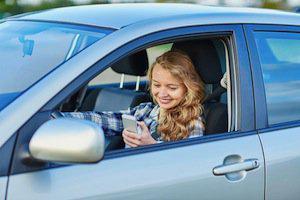 When you have been injured in an auto accident, understanding what may have led to the accident can be extremely important in subsequent legal action pursuit of compensation for your injuries. While many accidents may not have been entirely preventable by the at-fault driver, such as those resulting from  a blown tire or adverse weather conditions, a growing number of crashes are directly attributable to distracted driving, including texting while driving.

According to the National Highway Traffic Safety Administration, 18 percent of car crashes in 2012 that included a fatality or serious injury involved driver distraction, leading to 3, 328 deaths and 421,000 injuries. The Virginia Tech Transportation Institute also reported that the risk of being involved in a crash is 23 times higher than when the driver is not distracted, and 11 percent of drivers aged 18 to 20 who were involved in an accident admitted to sending and receiving texts when they crashed.

Despite being aware of the dangers, 69 percent of U.S. drivers, aged 18 to 64, self-reported texting while driving within 30 days of being surveyed, and a Pew study found that 40 percent of teen drivers reported having been in a vehicle when the driver used a cell phone in a way that endangered themselves or others. Clearly, with more than 171 billion texts sent and received in December 2012 alone, this issue raises deep concerns for the safety of those on the roads.

Distracted driving is not just limited to texting while driving. Drivers can also be distracted by interactions with passengers in the vehicle, adjusting the radio, applying cosmetics, or eating and drinking. A recent study released by the AAA Foundation for Traffic Safety estimated that distracted driving was directly linked with nearly six out of ten accidents involving teen drivers between the ages of 16 and 19.  The study analyzed video footage of participants in the moments before a crash and found that cell phone use was the primary factor in 15 percent  of all distracted driving accidents.

If you have been hurt in an auto accident caused by texting and driving, you may be entitled to collect compensation for your injuries. Our dedicated team can provide the help you need to start putting your life back together. Contact the experienced San Jose personal injury attorneys at Corsiglia, McMahon & Allard, L.L.P. today for a free consultation by calling (408) 289-1417.