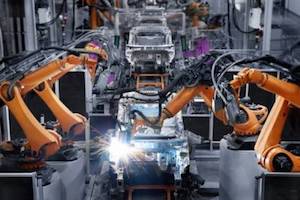 This week, the world watched as a rocket carrying a Tesla Roadster blasted off and began a journey that is expected to take the electric car into orbit around the sun. SpaceX and Tesla CEO Elon Musk said that he loved the idea of his $100,000 vehicle drifting “endlessly through space and perhaps being discovered by an alien race millions of years in the future.” In the months that preceded the launch, however, excitement was tempered for workers in the facility that manufactured Musk’s vehicle, as safety issues at Tesla’s Fremont plant attracted national attention.

Tesla’s facility in Fremont, California was formerly a manufacturing plant jointly owned by Toyota and General Motors. The original plant closed in 2010 and was purchased by Tesla. Under the direction of Elon Musk, the facility was dramatically updated, and today, massive manufacturing robots work beside their human counterparts in what many call the “factory of the future.” Unfortunately, however, the plant was not all that safe for the people who worked there, with hundreds of workers requiring medical attention between 2013 and 2016.

Company officials acknowledged the problems and noted that nearly two-thirds of the “recordable incidents” were caused by repetitive motion and uncomfortable positions as opposed to isolated accidents. According to Tesla, the company took major steps to address worker safety in 2017 with noticeable results.

The new-wave automaker says that conditions on the production floor have improved dramatically thanks to ergonomics experts who helped to identify areas of repetitive motion dangers. Reports indicate that the efforts have worked, dropping the “total recordable incident rate” (TRIR) at the Fremont facility by about 25 percent in 2017. With a current TRIR of 6.2, the plant is about average for the auto manufacturing industry. A Tesla executive also expressed confidence that the factory “will be below industry average in 2018.”

It is an unfortunate reality that many work-related repetitive motion injuries go unreported. Because repetitive motion injuries are less dramatic than falls and other types of accidents, workers often assume that they are experiencing everyday aches and pains. Such injuries, however, if left unaddressed can continue to worsen over time, causing workers to miss days and reducing their quality of life.

One of the most common types of repetitive motion injuries is carpal tunnel syndrome, a condition that often affects those who work on assembly lines or behind a computer. Other examples include tendinosis and bursitis, both of which can be debilitating to workers affected by them.

If you are suffering from a repetitive motion injury that you believe is related to your job, you may have options for collecting compensation. Contact an experienced San Jose workplace injury attorney to discuss your case. Call (408) 289-1417 for a free consultation at Corsiglia McMahon & Allard, L.L.P. today.