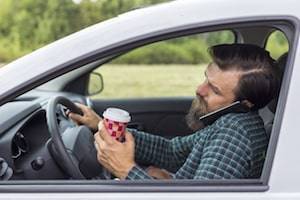 States throughout the U.S. are passing legislation limiting the use of cell phones behind the wheel. Georgia, Rhode Island, and Oregon are the latest states to require that hands-free devices be used by drivers, similar to California’s distracted driving law.

States are also ramping up public safety campaigns to inform the public of the dangers of distracted driving. While some states, like Arizona, have no laws prohibiting the use of cell phones while driving, and others, such as Utah, only have only a ban on texting, these campaigns and new laws are expected to embolden lawmakers across the United States to enact new distracted driving laws and increase penalties.

The Ramifications of Being hit by a Distracted Driver

Even though California was a leader in banning the use of electronic devices behind the wheel, distracted driving is still prevalent and leads to many accidents in the state. There are several things to keep in mind if you think you were injured by a driver who was on his or her phone:

First, it may be fairly simple to prove that the driver was using a cell phone at the time of the accident. A car accident attorney can force the driver to hand over phone records through a subpoena, which is approved and enforced by a court. If a subpoena is issued, and the driver does not comply, he or she could face additional penalties.

Third, proving that distracted driving was taking place at the time of the accident can help tip the scales in your favor in some cases, especially if fault is not completely clear. Judges and juries do not look lightly on distracted driving.

If you believe that you have been injured by a distracted driver, you should seek the assistance of a personal injury lawyer. You should not be on the hook for damages caused by someone who was breaking the law. Your health is of the utmost importance and must be placed above all else during this time.

The attentive California car accident lawyers at Corsiglia McMahon & Allard, L.L.P. routinely help accident victims get the help they need by aggressively negotiating with insurance companies or taking your case to trial. We aim to provide you with a quick resolution, but we never settle for an amount less than what is reasonable. Call us today at 408-289-1417 to schedule your free consultation.