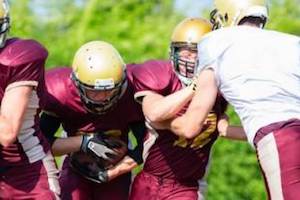 Football is a violent and dangerous sport, and those who play it do so with the understanding that they could get hurt. As more and more is learned about the link between concussions, blows to the head, and long-term brain injuries, however, there has been an increased focus on improving safety in the game in recent years. While it can be difficult to change long-standing traditions and elements of the sport that have been part of the game for many decades, that is exactly what the National Federation of State High School Associations (NFHS) is trying to do with rule changes designed to eliminate some the most dangerous plays.

The California Interscholastic Federation governs high school sports in the state of California. The CIF has joined nearly every other state in adopting the rules established by the NFHS for various sports including football. This allows high school student athletes across the country to compete under similar conditions and expectations.

Each year, the NFHS accepts proposed rule changes from its member organizations, including amendments to rules governing game play, safety, and virtually any other element of the sport in question. In recent years, many such proposals have been in regard to player safety—particularly in football. For the 2017 season, several new rules have been accepted and set forth, including one that specifically protects players in certain situations on the field.

For many decades, the “blindside” block or “crackback” block was a highlight reel hit. Such hits occur when a defensive player is pursuing the ball carrier and an offensive player approaches the defender from the blindside and delivers an unexpected, punishing blow. In an open-field hit like this, an exposed defender could easily suffer head and neck injuries due to the sudden violence of the impact.

From this season on, however, the NFHS has ruled that while a defender whose attention is focused on the ball carrier may still be blocked, blocks with excessive violence will result in a personal foul penalty against the blocker. Flagrantly violent hits or intentional hits to the defender’s head could result in the blocker being disqualified for the remainder of the game. A legal block in this situation is one where the blocker leads with his hands or arms, not his shoulder or helmet, and initiates contact with the defender from the front or the side, not the back.

The CIF and NFHS have encouraged coaches to work with their players on proper blocking techniques so that the likelihood of injury can be reduced. Football is dangerous enough without allowing blocking that includes excessive violence.

From a legal standpoint, most football-related injuries are part of the game, and those who play must accept certain risks. In some cases, however, an injury could be caused or exacerbated due to negligence or willful and wanton behavior by a coach or someone else in a position of authority. If your child has been hurt playing football and you believe that the injury should have been prevented, contact an experienced San Jose personal injury attorney for guidance. We will review your case and help you determine the best course of action for moving forward. Call (408) 289-1417 for a free consultation today.