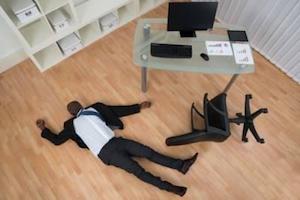 When you show up for work every day, you fully expect to clock in, do your job as well as you can, and then return home at the end of your shift. Unfortunately, this is not the case for thousands of workers each year, as tragedy can strike at any time. Being injured on the job is bad enough, but what would your family do if a workplace accident or illness claimed your life? According to a new government report, more than 4,800 deaths occurred in the workplace last year, a small increase compared to 2014.

Earlier this month, the Bureau of Labor Statistics released its 2015 Census of Fatal Occupational Injuries, a comprehensive index of workplace fatalities across the nation for fiscal year 2015. The BLS reports that 4,836 workers died as the result of workplace injuries in 2015, an increase of 0.3 percent from 2014. The number is the highest in several years, more than any year since 2008 when 5,214 workplace fatalities occurred. Hispanic or Latino workers accounted for nearly 19 percent of the deaths (903), and 495 deaths occurred among African-American workers, or about 10 percent.

As one might expect, certain industrial sectors were the setting for more workplace deaths than others. Private construction workers accounted for 937 fatalities, more than any year since 2008 in that particular industry. There were 765 deaths in the transportation and warehousing industry and 570 deaths in the areas of agriculture, forestry, fishing and hunting. By comparison, fatalities in the private oil and gas extraction industry dropped by 38 percent compared to 2014 down to 120 deaths in 2015. Regardless of industry, however, the most common sources of fatal injuries were roadway accidents, causing 1,264 deaths, more than a quarter of all work-related fatalities in 2015.

The BLS report also broke down occupational fatalities by state, with deaths in just four states accounting for nearly 30 percent of the national total. California, with 388 worker deaths, trailed only Texas—with a staggering 527 deaths or 12 percent—as the state suffering the most fatalities. Florida was third with 272 deaths, and New York was fourth with 236.

In many workplace death cases, the negligence or actions of another party may be at least partly to blame for the tragedy. When this happens, it may be possible for surviving family members to seek damages in a wrongful death lawsuit. If you have lost a loved one in a workplace accident, contact an experienced San Jose wrongful death attorney to discuss your options. Call (408) 289-1417 to schedule your free consultation at Corsiglia McMahon & Allard, L.L.C. today.