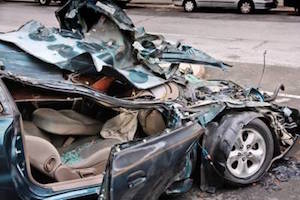 A car accident can happen at virtually any time and any place. Most of the accidents we hear about involve people we have never met or even heard of, but occasionally, a celebrity, popular athlete, or political figure will be involved in a crash that makes national headlines. Even more rare is an accident that involves more than one well-known personality, but that was exactly the case in Pacific Palisades, California, last week.

PGA golfer Bill Haas was in the area preparing for the Genesis Open, a weekend-long golf tournament. Haas was riding in a Ferrari with a member of the family he was staying with last Tuesday night when the driver of the car apparently lost control and collided with several vehicles, according to Los Angeles police reports. The Ferrari hit a BMW driven by a 50-year-old woman and a Toyota SUV driven by actor Luke Wilson.

The crash killed the 71-year old driver of the Ferrari and pinned the woman inside her upside down vehicle. Wilson and a witness at the scene acted quickly to get her out before the wreck caught fire. Reports indicate that the woman was “crying for help” and “very distraught,” but the two men carried her to safety. Wilson—perhaps best known for his big-screen roles in Old School and Legally Blonde—is credited with taking control of a scary situation. The witness referred to Wilson in an interview as “definitely a hero.”

Haas was briefly hospitalized but was released to return home to South Carolina. Wilson was not seriously hurt. The exact cause of the crash is being investigated.

Whenever a car accident occurs, one of the most important aspects of the investigation that follows is determining who was at fault for the crash. In some cases, fault is relatively clear. For example, a driver may run a red light and cause an accident in the intersection. In other cases, however, things are much more complicated. For example, if one driver was distracted by his or her cell phone, another driver was speeding, and third failed to yield the right of way, it may be difficult to determine was truly at fault. When fault is in question, it may be necessary to enlist the help of experts including engineers and accident resconstructionists to find out exactly what happened.

Call Us for Guidance

If you have been injured in any type of car accident, the experienced Monterey County personal injury attorneys at Corsiglia McMahon & Allard, L.L.P. will help you explore your options for collecting compensation. We will work to determine who caused your accident and then build a case to hold each responsible party financially liable. Call (408) 298-7200 for a free consultation today.