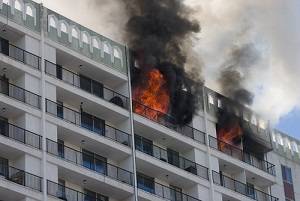 Residential fires are extremely dangerous and, unfortunately, quite common in California. Late last year, one apartment fire in Santa Rosa led to the displacement of 30 people, the destruction of four apartments, damage to eight more, and multiple burn injuries, causing losses totaling around $950,000. Fire officials stated that electrical issues were the likely cause. The fire was especially destructive because it initially went undetected due to the fact that, like many electrical fires, it started inside the walls and the attic space before spreading to the rest of the building.

In these types of situations, where the cause of the fire is electrical, a landlord’s negligence may be responsible. In order to establish a personal injury claim, the injured party must show that not only was the landlord negligent, but also the negligent act directly caused the injuries. This requires a showing that the landlord knew or should have known about a dangerous condition, but failed to use reasonable care to address the issue, which led to a foreseeable injury.

The types of negligence that can lead to residential fires include:

Some of the most common injuries that result from residential fires include burns, respiratory problems, sprains or broken bones, and emotional trauma.

In some instances, a landlord or property owner’s negligence can be presumed if:

In order to establish a negligence per se claim for a residential fire, a person would need to show that a the landlord violated a law or regulation that was intended to prevent injuries to residents caused by electrical fires, and that the negligent act did lead to an injury.

In the event that a landlord’s negligent act caused an apartment fire, an injured tenant may be able to recover compensation for medical costs, any lost property, and the costs associated with moving and renting a new apartment.  However, a person injured in a fire has only two years to file a claim for his or her injury. After this deadline, the victim will not be able to recover damages for medical costs, replacement housing, or other damages.

If you or a loved one have been injured in an apartment fire, it is important that you discuss your case with a lawyer who can help you collect compensation for the harm you suffered. Please contact the experienced San Jose personal injury attorneys at Corsiglia, McMahon & Allard, L.L.P. for a free consultation.