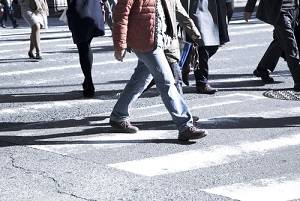 Many accidents involving pedestrians and vehicles occur at intersections, especially in busy metropolitan areas. This has led numerous cities to experiment with new methods of traffic control in an effort to decrease the number of accidents. To this end, the city of Santa Monica recently agreed to install 11 pedestrian scrambles in the downtown area.

In the standard model for traffic control, vehicles are given a green light along one street while pedestrians are given the signal indicating that it is safe to use the crosswalk on the perpendicular roadway. Those traveling by foot are then parallel to moving traffic and so able to cross safely. Later, the lights change and the same process occurs in the intersecting direction.

Pedestrian scrambles, also known as scramble intersections, are pedestrian crossing systems that stop traffic and allow pedestrians to cross streets in every direction, including diagonally. Pedestrian scrambles have been implemented in many major U.S. cities. On average, the number of accidents involving both vehicles and pedestrians has decreased in those areas due to the fact that pedestrians are given an exclusive phase to cross without any danger of moving vehicles. Additionally, the option to travel diagonally allows pedestrians to avoid crossing traffic twice, further decreasing the chances of being involved in an accident.

Many accidents that involve pedestrians and vehicles occur when cars are making left or right turns. For instance, drivers making left hand turns are often too focused on oncoming traffic to realize that although the road may be clear, pedestrians may still be crossing. Alternatively, drivers making right hand turns often forego looking to their right to check for pedestrians or bicyclists before initiating the turn. It is hoped that installing pedestrian scrambles in downtown Santa Monica will eliminate some of these risks.

Despite precautions, many pedestrians are still injured in encounters with vehicles on a daily basis. Because pedestrians are so exposed, injuries sustained in these types of accidents can be serious, and even deadly. Fortunately, negligent parties can be held responsible for the medical costs associated with causing an injury, which may include:

Even if a victim was partially at fault in causing the accident, he or she may still be able to recover a portion of the damages under California’s legal theory of comparative negligence.

The expenses associated with being injured in an accident involving a car and a pedestrian can have devastating financial, physical, and emotional repercussions. If you have been injured in an accident caused by another person’s negligence, please call the aggressive San Jose personal injury attorneys at Corsiglia, McMahon & Allard, L.L.P. at (408) 289-1417 to schedule a free initial consultation.