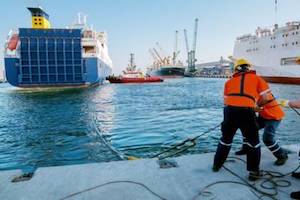 While there are many occupations that present a variety of dangers to workers, longshoremen and those who work on the docks of harbors and ports encounter a unique combination of workplace hazards. Dock workers must deal with irregular schedules, long hours, tight deadlines, and slippery surfaces. In addition, they are often moving massive shipping containers using large-scale cranes and other machines that can be deadly if they are not utilized properly.

There is one danger, however, that is often overlooked. Many ships that come in and out of port carry hazardous and flammable chemicals, and leaks can prove to be disastrous. Such was nearly the case at the Port of Long Beach last month when almost a dozen dock workers were exposed to a harmful substance.

At around 9:30 a.m. on August 6, the Long Beach Fire Department received an emergency call saying that a container ship near the Port of Long Beach was leaking a hazardous material. A response team found the source of the leak to be a 6,000 gallon chemical container aboard a ship docked at Pier G. The leak was eventually contained and the leaking container was removed from the ship, but not before 11 dock workers and a firefighter were injured.

According to news reports, the chemical was determined to be propyl acetate, an industrial solvent that is sometimes used in fragrances and as flavor additive in food products. In small amounts, the chemical is considered safe for its approved uses, but on a larger scale, the concentrated substance can cause severe irritation to eyes, skin, and lungs.

Ten dock workers were treated at the scene for harmful exposure, and one was transported to a local hospital with injuries described as “mild.” A Long Beach firefighter was also taken to the hospital, but reports indicate that his injuries were not related to exposure to the chemical.

By 6 p.m. that same day, the leak had been cleaned up and the container ship secured. The cause of the incident has not been disclosed.

If you have been injured on the job, you may have several options for collecting the compensation you need to get back on your feet and back to work. At Corsiglia McMahon & Allard, L.L.P., we understand the challenges you may be facing, and we are equipped to provide the top-quality representation you deserve. Contact our skilled San Jose workplace attorneys today for a free consultation.