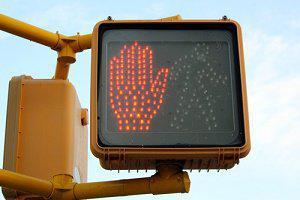 Unfortunately for pedestrians, thousands of people every year are struck by cars while walking across California roads and streets. Pedestrian injuries can be extensive, ranging from lacerations and broken bones to more serious injuries such as spinal cord or brain injuries. At intersections, pedestrians have the right of way, and cars are required to stop for them. Sometimes, however, drivers do not pay proper attention, especially when making turns. Additionally, sometimes pedestrians jaywalk, increasing the risk of a collision. Even if you were jaywalking, you may be able to recover damages from a negligent driver in a personal injury suit.

In California, a pedestrian jaywalks when he or she, whether knowingly or unknowingly, violates traffic regulations, often by crossing a street at any point other than in a marked crosswalk, or in an unmarked crosswalk at an intersection. California law provides that if a pedestrian is crossing anywhere other than in a crosswalk, either marked or unmarked, he or she must yield the right-of-way to drivers who are close enough to present an immediate hazard.

Pedestrians crossing in crosswalks must use due care when crossing streets. They must not suddenly dart out into the path of an oncoming car, or unnecessarily delay traffic while crossing.

California law requires drivers to yield the right-of-way to pedestrians who are crossing the street within a marked crosswalk or in an unmarked crosswalk at an intersection. When a driver is approaching a pedestrian in a crosswalk, the driver must use all due care, reduce the speed of the vehicle, and take any further steps necessary to protect the pedestrian’s safety. At red lights, drivers may turn right after stopping, but they must yield the right-of-way to pedestrians in the crosswalk.