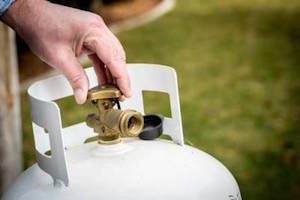 Residential fires occur at an alarming rate in California, and most result in expensive property damage, debilitating and painful injuries, and, in some tragic circumstances, death. In many cases, such fires involve propane and the tanks which store the gas.

Propane is a derivative of gasoline that is stored in a liquid form and then released as a vapor. Propane tanks are commonly used to fuel appliances such as grills and barbecues. Because of the gas’s low boiling point, it vaporizes as soon as it is released from the canister and does not require a carburetor or separate vaporizing device. While this is extremely convenient for those needing a portable form of heat, propane tanks also come with certain risks. For example, propane is denser than air, so if a leak occurs, the gas tends to sink into a nearby enclosed area which increases the risk of explosion and fire.

The National Fire Protection Association (NFPA) provides a number of tips to help homeowners prevent propane fires in the home. The group suggests that propane users:

In many cases, the negligent acts of another person can cause a leak and subsequent explosion or apartment fire. For example, when propane tanks are exposed to extreme heat, they can build up pressure and eventually cause the tank to rupture. If another’s carelessness results in a propane fire, an injured party can seek damages in court under a theory of negligence. This requires the victim to prove that:

However, in some instances, responsibility for an accidental propane fire can be laid at the feet of the tank’s manufacturer or distributor. If a manufacturer or seller sold a tank with defective gas connectors or control valves or improperly assembled hoses, he or she can be held strictly liable for injuries sustained by a victim. Manufacturers can also be held accountable for a failure to inspect or for a faulty design. Manufacturers and distributors of propane barbecues and grills can also be held liable if they sell appliances that were negligently designed or assembled.

Many families use propane gas as a means of heating their homes, and, because propane can be so dangerous, specially trained individuals are required to refill and repair the propane tanks on the property. These companies and their employees can be held responsible for negligent pipe repairs or the faulty installation of a tank if injuries result.

If you have been injured in a fire caused by a propane explosion, an attorney may be able to help you obtain compensation from the responsible party. Please call a passionate Monterey County personal injury lawyer at Corsiglia McMahon & Allard, L.L.P. for a free consultation.