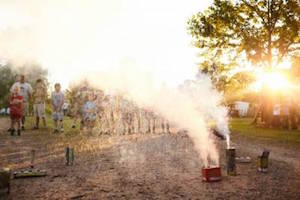 The Fourth of July holiday is practically  synonymous with fireworks. In fact, Americans will light around 285 million pounds of fireworks to celebrate Independence Day. That amounts to roughly $1.09 billion worth of fireworks! While most fireworks displays go as planned, it is important to remember that fireworks can be extremely dangerous.

Recently, a line of consumer fireworks was recalled after the fireworks caused several individuals to suffer burns. Some 36,100 fireworks were pulled from shelves because of the danger they could “explode unexpectedly after being lit.” While many fireworks are meant to explode, the recalled products were intended to produce colorful smoke rather than explosions, according to the U.S. Consumer Product Safety Commission. The fireworks were sold in stores in Illinois, Ohio, Vermont and Wisconsin. In addition to faulty fireworks, the misuse or illegal use of fireworks cause injuries. An estimated average of 9,125 fireworks injuries occur every year with seven people losing their lives due to such accidents.

Fourth of July revelers can reduce their risk of being killed or injured as a result of fireworks by following a few safety rules:

Despite taking proper precautions, a poorly designed or defective fireworks product could cause serious injuries or even death. If you or a loved one is injured by fireworks this Fourth of July, contact an experienced personal injury attorney in Monterey County. Call (408) 298-7200 for a free consultation at Corsiglia McMahon & Allard, L.L.P today.