Earphone Use While Driving 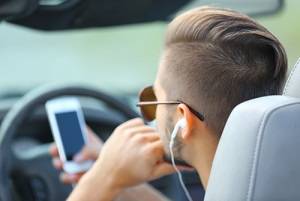 California has instituted several new laws, which took effect at the beginning of the month, to protect drivers and passengers. One of these new laws clarifies California’s law on the use of headphones while driving and introduces stricter regulations to help to prevent distracted driving.

Prior to January 1, California law prohibited drivers on the state’s roadways from wearing either headsets covering both ears or earplugs in both ears while operating a motor vehicle or bicycle. The law was amended to clarify the types of earphones that are not allowed. Now, drivers are not permitted to wear earbuds or earphones covering, resting on, or inserted in both ears. Using only one earbud at a time, however, remains legal.

Some exceptions exist to the prohibition, including:

Violators of the law will be ticketed.

Distracted driving is a problem in California, and sound distractions can be dangerous. Drivers and cyclists may use headphones to listen to music or use Bluetooth devices to talk on the phone hands free. Using headphones or earbuds may seem like a safe choice, allowing drivers to avoid violating hands-free laws. But the music or phone conversation can be a distraction when drivers concentrate on what they are listening to, rather than focusing on the road.

Headphones can also cause drivers to be unable to hear the horns of other cars, the sirens of emergency vehicles, or the other warning signs of the road. Bicyclists may not be able to hear approaching cars, which can put them at an increased risk of collisions. Driving with only one earbud, however, allows drivers to hear the sounds around them and concentrate on driving.

When a driver collides with another driver or a pedestrian because of wearing headphones or another distraction, it can lead to a personal injury lawsuit. In California, violating a law constitutes negligence per se. This means that if an accident victim can show that the other driver was using headphones or earbuds while driving, the law automatically considers the driver to have been negligent. The victim does not have to prove that the driver was actually distracted by the music or conversation, or negligently blocked his or her hearing, in order to recover damages.

If you have been injured in an auto or bike accident in California, an attorney may be able to help you obtain compensation from the responsible party. Please call a skilled San Jose personal injury attorney at Corsiglia, McMahon & Allard, L.L.P. to discuss your case.