Distracted Driving on the Rise, Despite Growing Concerns 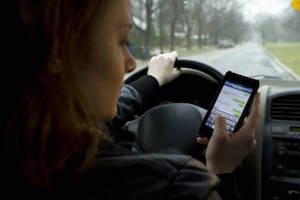 April is Distracted Driving Awareness Month which means that public education and awareness campaigns have been ramped up to remind drivers about the dangers of driving while distracted. While the most commonly discussed form of distracted driving involves the use of cell phones, eating, drinking, applying makeup, tending to children, and even just talking to a passenger can all take a driver’s attention away from the road. Federal safety officials estimate that about 10 percent of all roadway fatalities are caused by distracted driving, but a new study shows that the number of people who use mobile devices while driving has actually gone up in recent years.

The AAA Foundation for Traffic Safety recently released the results of its annual Traffic Safety Culture Index. The index is a survey that measures drivers’ opinions and behaviors while on the road. According to the survey, nearly 90 percent of drivers polled said that they believe that distracted driving is on the rise, compared to 68 percent who said aggressive driving was increasing and 43 percent who expressed concern about increasing drunk driving dangers.

The increase in concern, however, does not seem to be enough to change the behavior of many drivers. In 2013’s version of the index, 46 percent of drivers said that they had recently talked on a hand-held cell phone while driving. This year, that number went up to 49 percent. More than one-third (35 percent) said that they recently sent a text or an email.

“There is a disconnect between what drivers do and what they believe,” said Jake Nelson, the director of traffic safety advocacy and research for AAA. “While most recognize the dangers created by taking your eyes off the road, they engage in distracting behaviors anyway.”

While government estimates indicate that the number of distracted driving crashes has actually gone down by 2 percent over last year, many believe that such estimates are rather unreliable. The problem, critics say, lies in proving that a driver was distracted. Unless a driver admits to taking his or her eyes off the road, it is nearly impossible to prove that is what happened.

A couple years ago, the same AAA Foundation conducted a research project involving teen drivers and in-vehicle cameras. That project determined that distractions were a factor in 58 percent of accidents, 44 percent more than the government’s current estimate of 14 percent. While it is reasonable to assume that teen drivers are more easily distracted than drivers in other demographics, it is also reasonable to assume that distracted driving contributes to more than 14 percent of all crashes.

Injured by a Distracted Driver?

If you or someone you love has been injured in an accident caused by distracted driving, contact an experienced Monterey County personal injury attorney to get the help you need. Call (408) 298-7200 to schedule a free consultation at Corsiglia McMahon & Allard, L.L.P. today.