Distracted Driving Is Not Just About Cell Phones 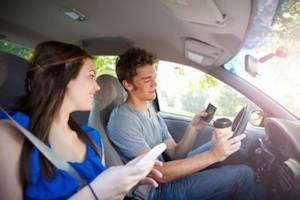 It seems as if during the last decade or so, the news has been full of reports of car accidents caused by texting while driving. There are many billboard, television, and radio ads that warn of the dangers of using a cell phone while driving. If a driver cruising at 55 mph takes just 5 seconds to look at a text message on a cell phone, for example, he or she will have had his or her eyes off of the road long enough to cover a football field. When your eyes are not on the road, you are essentially driving blind. While texting and driving is extremely dangerous, there are other ways in which drivers get distracted that are potentially just as deadly.

Startling Statistics About Driving With Children

According to the Centers for Disease Control and prevention, an estimated nine people lose their lives and over 1000 are injured in an accident caused by distracted driving every day. It is often difficult to determine exactly what caused a driver to become distracted before causing a car accident. Drivers may simply not remember or they are hesitant to admit that they had their eyes off of the road.

Furthermore, some drivers are driving in unsafe conditions without even realizing it. For example, many parents drive their children to and from school, extracurricular activities, or playdates. Simply traveling with children in the car may be more distracting than using a cell phone is. Researchers in Australia found that children are 12 times more distracting to a driver than talking on a cell phone. Shockingly, their research also shows that drivers with children in the car are looking something other than the road for an average of over three minutes during a 16-minute trip.

Beware of Driving on “Auto Pilot”

Have you ever been driving and realize that you have been lost in thought for so long that you do not actually remember the route you took? Many drivers experience “auto pilot” which happens when a driver zones out or loses focus while driving. According to research by Erie Insurance, this may be the deadliest type of distracted driving. Driving "in a fog”, daydreaming, or getting lost in thought accounts for 62 percent of distracted drivers involved in road fatalities.

Have You Been Injured by a Distracted Driver?

If you or someone you love has been injured in an accident caused by a distracted driver, you may be entitled to compensation. At Corsiglia McMahon & Allard, L.L.P. we fight for the rights of those who have been injured as a result of another person’s carelessness. Contact a skilled San Jose personal injury lawyer to discuss your situation in a free initial consultation. Call (408) 298-7200 for an appointment today.