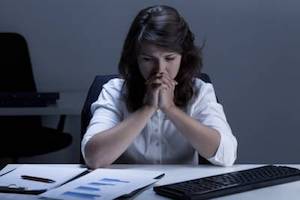 According to recent estimates, about 23,000 on-the-job injuries occur during an average day in the United States. This translates into approximately 8.5 million workplace injuries every year, nearly 5,000 of which result in death. In addition to the expenses of recovery incurred by workers and their families, work-related injuries cost the American economy approximately $192 billion annually.

With numbers such as these, it is understandable that health and safety organizations would be interested in understanding the factors that contribute to on-the-job accidents. Sometimes, their findings reveal rather surprising connections. A new study out of Colorado, for example, seems has found a link between mental health and workplace injuries—but only in women.

Researchers from the Colorado School of Public Health’s Center for Health, Work, and Environment conducted an in-depth review of injury claims at more than 300 companies from various industries within the state of Colorado. The review included almost 17,000 workers from entry-level employees to top executives.

Their findings indicated that men, on the whole, were more likely to be injured at work than women were, but mental and behavioral health considerations did not affect the injury risk for men. Women who suffered from depression, anxiety, or fatigue, however, were found to have a much greater risk of being injured. Nearly 60 percent of injured women reported a mental or behavioral health condition prior to being hurt. Only about 33 percent of injured men reported such a condition.

Dr. Natalie Schwatka, the study’s lead author, suggested that there several factors that may have contributed to her team’s findings. First, women are much more likely than men are to admit to having health concerns of any type—especially mental or behavioral health issues. Many of the injured men may have experienced depression or anxiety but never told anyone about it. Dr. Schwatka also pointed out that “women may face different stresses at work and at home.” She also said that more research is needed on the subject.

Work-related accidents are often viewed as physical concerns, but studies like this one show that mental, emotional, and behavioral health all play a role in workplace safety. Dr. Schwatka observed that her findings should encourage employers to “consider what they can do for the behavioral/mental health of their entire workforce” and not just women or just men.

If you have been injured on the job and have questions about your options for collection compensation, an experienced San Jose workplace injury attorney can help you find the answers. Call (408) 289-1417 for a free, no-obligation consultation at Corsiglia McMahon & Allard, L.L.P. today.