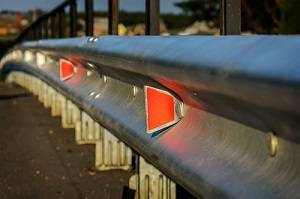 Roadway safety devices such as guardrails are designed to protect drivers and their passengers. Guardrails can prevent people from driving off cliffs, keep vehicles out of oncoming traffic, and stop cars from going into ditches when a crash occurs. But if they are poorly designed or used incorrectly, such safety devices can also create hazards and cause injuries on roadways.

In the event of a collision with the guardrail terminal, the metal railing is supposed to pass through a chute in the terminal and harmlessly out the other end, avoiding contact with the vehicle. But with the redesigned terminals, the railing instead jams inside the chute and sometimes pierces vehicles. Instead of crumpling upon impact, the guardrails instead impale cars and sometimes injure occupants. There have been reports of people being stabbed with the guardrails and suffering serious injuries or even death.

Early this year, the Federal Highway Administration did crash testing on the redesigned guardrail terminals to determine whether they were safe for use on roadways. The terminals met the FHA’s crash test criteria and passed the test. But one reason for the passing grade was that the purpose of the guardrails is to prevent injury to people in a collision, not to protect vehicles from harm. In its report, the FHA stressed that even devices that pass safety testing can lead to fatalities and serious injuries.

More recently, Virginia’s Department of Transportation conducted testing on guardrail terminals because the state found the federal testing to be insufficient. The guardrails failed two of the six tests conducted by the Department of Transportation, resulting in a finding that they were unsafe, despite meeting federal standards. The state has plans to replace them with guardrails manufactured by another company.

This is not the first time Trinity’s ET-Plus guardrails have led to legal troubles. Earlier this year, a qui tam whistleblower lawsuit resulted in a finding that Trinity made false claims to the government. The company was ordered to pay $464 million to the federal government, and $218 million to the whistleblower, Joshua Harman.

Defective or dangerous safety devices such as the ET-Plus guardrails can cause serious injuries in an automobile accident. They can provide a basis for a personal injury or wrongful death lawsuit, and victims may be able to recover damages for the injuries caused by these dangerous devices.

If you have been injured in a car accident and someone else is at fault, an attorney can help you review your options and recover compensation for your injuries. Please contact the skilled San Jose personal injury attorneys at Corsiglia, McMahon & Allard, L.L.P. for an initial consultation.