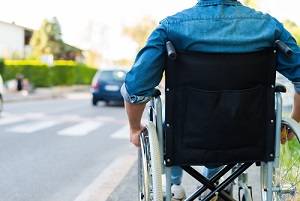 California has some of the busiest streets in the nation. In cities, such as San Francisco, Los Angeles, and San Diego, this creates a heightened risk for traffic accidents involving pedestrians and those who are confined to wheelchairs.

While wheelchair accessibility has improved in recent decades, many users, whether using wheelchairs for a short period of time or on a long-term basis, face serious obstacles in day-to-day life. Unfortunately, some of these obstacles result in unsafe conditions for those who are wheelchair-bound.

For instance, wheelchair users have a significantly higher risk of being injured in intersections than other pedestrians. In a recently published article, researchers reported that wheelchair users are three times more likely to die in traffic accidents than the rest of the population, and that almost 50 percent of fatal collisions involving wheelchair users occurred at intersections. In roughly four out of 10 of these accidents, traffic flow was not controlled.

Researchers attributed this high risk to poor pedestrian infrastructure that is not adapted to those with impaired mobility. As a result, wheelchair users are often forced to use the streets, exposing them to greater risk. The data, collected from police reports, also indicated that in around 15 percent of cases, wheelchair users were not visible to drivers. Furthermore, wheelchair users who see a potential threat often cannot speed up quickly enough to move out of the way.

The Americans With Disabilities act

Federal regulations require state and local governments to provide well-designed curb ramps at pedestrian crosswalks and at public transportation stops where walkways intersect curbs, which enable wheelchair users to safely access public streets. Curb ramps must comply with ADA standards for width, slope, cross slope, and placement. If a state or local government entity fails to provide adequate ramps, it can be held liable for any injuries that occur as a result.

In personal injury cases, California adheres to the “eggshell plaintiff” rule. This means that someone who causes an accident can be held liable for the victim’s injuries even if the victim had a health condition that caused him or her to suffer a more serious injury than another individual would have in the same situation. Even if the victim of an accident was wheelchair-bound which made him or her particularly susceptible to injury, the defendant will still be held responsible.

Whether an accident was caused by a negligent driver or a city’s dangerous roads, wheelchair users who were injured in traffic collisions may be able to recover for the harm they suffered. If you or a loved one has been injured in a car accident in California, an attorney may be able to help you obtain compensation for medical costs, lost wages, and pain and suffering. Please call a skilled San Jose car accident injury attorney at Corsiglia, McMahon & Allard, L.L.P. for a free consultation.