Can I Sue If a Bicycle Hits Me? 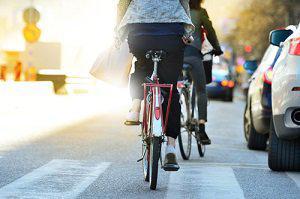 The law firm of Corsiglia McMahon & Allard in San Jose is an experienced injury firm that is adept at assessing personal injury grievances of many kinds. It may be surprising to learn, but if you have been harmed by a cyclist on the sidewalk, you do have rights to file a claim for your injuries. Before you consider taking legal action, however, it is important to understand the laws that govern motorists and cyclists in the state of California.

Under the California Vehicle Code, California cyclists are bound by the same laws as other motorists. As such, they are entitled to the same rights and assume similar responsibilities. Cyclists must abide by all the regular rules of the road, including appropriate signaling, safe turning and speeds, and effectively negotiating stop signs and traffic lights. Individual counties and cities in California have their own laws regarding sidewalk usage for cyclists. While it may be legal to ride a bicycle on the sidewalk in one city, another area may prohibit it.

It is best to determine if the city in which you were injured allows cyclists to ride on sidewalks, and even if a bicycle accident occurred in a city where cyclists are permitted on pedestrian ways, other factors may still contribute to a personal injury case. Just as it is against the law to operate a motor vehicle under the influence of drugs and alcohol, it is illegal for cyclists to ride while intoxicated. It is also illegal for a cyclist to wear two earplugs or a headset that covers both ears. If a cyclist is thought to have been responsible for an accident while riding under the influence or wearing a distracting device, he or she may be at fault.

Like cars, trucks and motorcycles, bicycles must be visible at night. If not properly equipped with the correct reflectors and lights, bicycles are unlawful to operate after dark. If a cyclist has caused harm while riding an improperly lit bicycle at night, then he or she may be held legally responsible. For night riding, bicycles must be equipped with a front white headlight and a red rear reflector or taillight. Additionally, a white or yellow reflector must be attached to each pedal or the rider's ankles or shoes.

Riders are encouraged to wear brightly colored and/or reflective clothing to increase their visibility after dark. Bicycles are expected to ride with the flow of traffic, and when possible, to the right of vehicle traffic. Bike lines should be utilized when available, and riders must exercise extreme caution when turning, being sure to communicate with proper uses of hand signals. Failure to meet any applicable safety expectation can result in increased liability on the part of the rider in the event of an accident or injury.

If you have been injured by the action of a bicycle rider, the team at Corsiglia McMcMahon & Allard, L.L.P., is ready to help you. Contact one of our experienced San Jose personal injury attorneys at (408) 289-1417 to schedule an initial consultation. We will review your case, answer your questions, and help you understand your options under the law.