Trial Attorneys Helping Injury Accident Victims
Results Count. Hundreds of Millions Won for Injured Victims.
Contact Us
Home
Articles
Can I Collect Damages for an Injury Sustained in an Attack at Work?

Can I Collect Damages for an Injury Sustained in an Attack at Work? 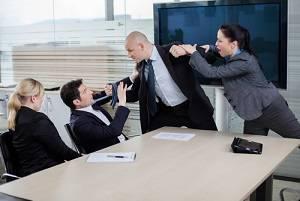 There are a lot of ways you can be injured at work. You might be involved in a collision while driving a company vehicle. You might suffer an injury as a result of an equipment malfunction or a defective piece of safety equipment. Another worker's negligence could cause you to be struck by a falling object, burned, shocked, or otherwise harmed. One cause of injury that is often overlooked, though, is an injury sustained in an attack by another person. This is known as battery.

Battery is a criminal offense. What many battery victims do not realize is that they can recover compensation for their injuries sustained in such an attack regardless of whether the attacker is convicted of battery. This is because injury claims are civil claims, not criminal claims, and if you can prove that another party caused you to suffer damages by intentionally or negligently injuring you, you can seek compensation for those damages.

Battery is often discussed in conjunction with a similar offense known as assault. Although the two are frequently charged together, they refer to two specific offenses. Assault is defined as the intentional invocation of fear of physical harm in a victim. For example, making a first and threatening to punch a victim can be charged as assault if the victim reasonably felt that his or her safety was at risk. Battery is the actual attack on the victim. To continue with the previous example, punching the victim after threatening to do so may be charged as battery.

Proving That You are a Battery Victim

Like other injury claims, you must prove the following to receive compensation in a battery case:

You may also receive compensation for punitive damages, which are fines levied on the attacker to punish him or her for the injurious act.

Your lawyer can help you obtain the necessary evidence to prove that the above are true. The attacker may claim that the battery was in self-defense or that you gave consent to potentially be harmed. Your claim is only as good as the evidence you have to support it, such as witness testimonies, photographs of the event and the injury, and testimonies from your doctor and other expert witnesses.

If you have been injured in any type of accident at work, including an attack by another individual, seek appropriate medical attention for your injury as soon as possible. Then, contact an experienced San Jose workplace accident lawyer to talk about pursuing a workplace injury claim. To learn more, schedule your initial consultation with a member of our team at Corsiglia, McMahon, & Allard, L.L.P. We proudly serve clients throughout the Bay Area, San Mateo County, Alameda County, San Benito County, Monterey County, and Santa Clara County.