Can a Daycare Be Held Liable for Children’s Injuries? 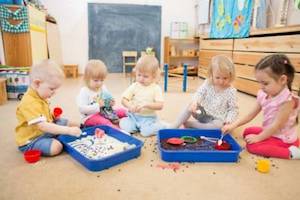 Many parents remember the first day they dropped their child or infant off at daycare. It can be difficult to hand over the person who is most precious to you to a child care worker that you barely know. One fear that parents have when they leave their child in the care of a babysitter or daycare is that their child will get hurt. It is understandable that children will sustain minor injuries such as scraped knees playing outside or pinched fingers on a toy at some point in their daycare stay, but what happens if a child is seriously injured at a child care facility? If the child’s injury was caused by negligence on the part of the facility or the child care workers employed there, the child and his or her family may be entitled to compensation.

A daycare has many responsibilities. In addition to feeding, changing, and playing with children and babies, the staff at the facility also have a duty to keep the environment free from obvious dangers or hazards. Things like broken toys or equipment should be removed from children’s reach. Playground equipment should be correctly installed and sturdy.

Daycare staff also have a responsibility to make sure they are washing their hands after changing diapers and before preparing food. Keeping unsanitary conditions can spread disease and lead to minor wounds becoming much more serious through infection. Put simply, daycare centers can be held liable for a child’s injuries if they did not exercise “due care” to prevent any foreseeable injuries. Due care is the carefulness which would hypothetically be taken by any reasonable person or entity they were in similar circumstances in order to prevent harm.

What Factors Does a Judge Consider?

Presonal Injury Lawyers Who Fight for You

If your child has been injured or killed while under the care of a daycare worker, you may be able to seek compensation. Contact an experienced San Jose personal injury lawyer to explore your options. Call (408) 289-1417 to reach the law firm of Corsiglia McMahon & Allard, L.L.P. today.