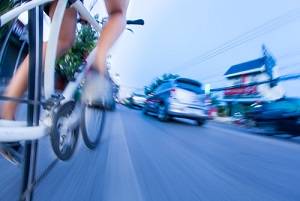 For cyclists, sharing the road with drivers can be dangerous, or even fatal. Cyclists are in an especially vulnerable position in the event of a collision. Fortunately, California’s laws include protections for cyclists. Since 2014, the state has required drivers to maintain a three-foot distance between any part of an automobile and a bicyclist in the roadway. If a driver violates the state’s biking protection laws and an injury results, the violation can make it easier to recover damages for negligence.

California’s Three Feet for Safety Act states that, if a driver is overtaking and passing a cyclist going the same direction, the driver must not interfere with the safe operation of the bicycle. The driver should take into account the size and speed of the vehicle and the bicycle, traffic and weather conditions, visibility, and the surface and width of the road, and must maintain a minimum three-foot distance at all times.

If, due to traffic or road conditions, the driver cannot pass a cyclist with at least three feet between the car and the bicycle, then the driver must slow down to a reasonable speed and pass the bicycle only when it is safe for the cyclist.

If a driver violates this law, he or she will be charged a fine of $35 for passing inappropriately, and $220 if the violation causes a collision and injury to the cyclist.

If a cyclist is biking and is injured by a motorist who is violating this Act, the violation will be useful if the cyclist chooses to file a civil lawsuit. Cyclists who are injured by drivers who fail to exercise due care while driving may recover damages in a negligence action.

If the victim can show this, it is then up to the driver to prove that he or she was not negligent.

Breaking any traffic laws, including the Three Feet for Safety Act, can lead to liability under a theory of negligence per se. Thus, if a driver passes a cyclist who is closer than three feet away, and hits and injures the cyclist, the driver is presumed to be negligent. If the driver is negligent per se, the cyclist may then ask for damages to compensate him or her for injuries related to the accident, and need not otherwise prove the driver’s negligence.

If you have been injured in a bicycle accident because of a driver’s negligence or violation of a statute, please contact the skilled San Jose personal injury attorneys at Corsiglia, McMahon & Allard, L.L.P. for a free initial consultation.