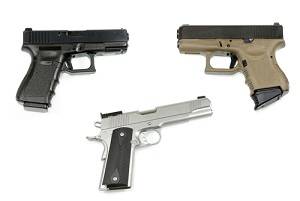 Gun violence is a sadly common occurrence. But victims of gun violence, or their family members in the event of a fatal incident, whether purposeful or negligent, can recover damages in a personal injury suit. A new law in California recently took effect that will work to prevent gun violence. Family members and law enforcement officials can ask a court to seize the firearms of a person they believe poses a threat of danger.

Assembly Bill 1014 took effect on January 1, 2016. The new law allows police and immediate family members to petition the court to seize the firearms and ammunition of a person who poses threat of gun violence to him or herself or to others. There is no requirement to give notice to the gun owner before the request is made or the restraining order is issued. The subject of the order will also be put on California’s list of those forbidden from purchasing a firearm.

Immediate family members, for purposes of the law, include:

The subject of the restraining order must surrender all guns and ammunition within 24 hours. Alternatively, he or she may opt to sell the firearms or store them with a licensed firearms dealer. The temporary order lasts for 21 days. Before that time expires, the petitioner and the gun owner must attend an evidentiary hearing at which the judge determines whether to terminate the order and return the guns, or to extend the order for a year.

The law is intended to prevent gun violence of the sort that may lead to personal injury suits. Former Assemblywoman Nancy Skinner, D-Berkeley, introduced the bill in 2014, two days after Elliot Rodger killed six people then himself in a shooting spree in Isla Vista. Despite the fact that his family knew that he was threatening violence, they had no legal tools with which to prevent the tragedy.

Personal injury lawsuits are available for the victims of both negligent and intentional gun violence in California. Those who are injured because of another’s recklessness or intentional wrongdoing may recover monetary compensation for their injuries. But hopefully, this new law will help to prevent gun violence from occurring in the first place.

If you or a loved one have been injured by gun violence, please contact the skilled Monterey County personal injury attorneys at Corsiglia, McMahon & Allard, L.L.P. to schedule a consultation.