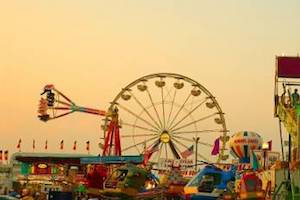 An amusement ride called Fire Ball recently malfunctioned killing one rider and injuring several others. The ride, which was assembled at the Ohio State Fair, is a swinging pendulum ride which spins as it takes riders back and forth. Similar rides are found at fairs and amusement parks around the country. A video taken by a spectator shows a row of seats dislodging from the ride and falling to the ground. Passengers can be seen being thrown from the ride. One young man was killed in the accident, and his family is now seeking justice through a wrongful death lawsuit. His family says that the 18-year-old has just joined the Marines. At least two other riders are in still in critical condition, and one is in serious condition.

Investigators Do not yet Know the Cause of the Malfunction

Inspectors say that the Fire Ball ride in Ohio had passed inspection prior to the accident—which occurred on opening night of the Ohio State Fair in Columbus. Mark Kitrick, the attorney for the deceased victim’s family, is not convinced that the ride was safe. "It's a fault issue, who's at fault…I mean inspections, were they done properly? Was there a rush? Were they really done the way they should have been? Who assembled it and how did it get assembled in such a way to lead to this failure?” Kitrick hired an accident reconstruction team and investigator to gather evidence that might lead to the cause of the ride malfunction. At this point, he is not sure what compensation he will seek for the family of the deceased.

California and several other states have closed rides similar in design to Fire Ball as a precautionary measure. Rides at the Santa Cruz Beach Boardwalk and in the Bay Area were among those closed.

The US Consumer Product Safety Commission says that there were approximately 30,000 injuries related to amusement park or fair rides last year. Also in 2016, the 10-year-old son of a Kansas state legislator was killed on a huge water slide. Another accident involving a Ferris wheel left three girls injured in Tennessee. All told, there have been 22 deaths since 2010 associated with amusement attractions.

Should thrill seekers avoid riding on amusement park or fair rides? The International Association for Amusement Parks estimate that about 335 million people visit the parks each year and that the risk of being seriously injured is minimal—about one in 16 million. The chances that you will be seriously injured or killed in an accident at an amusement park or fair is small, but it does exist. Anytime a person rides a thrill ride, he or she assumes certain risks, but death should not be among them.

If you or a loved one has been injured on an amusement park ride, you may be able to collect compensation from the park owner, ride operators, or even the manufacturer or assembler of the ride. To learn more, contact an experienced San Jose personal injury attorney. Call (408) 289-1417 for a free consultation with Corsiglia McMahon & Allard, L.L.P. today.