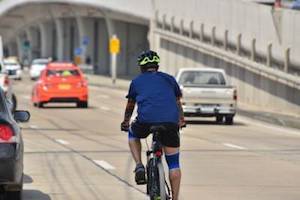 Accidents involving bicyclists and vehicles occur far too often on California’s busy streets. Injuries sustained in cycling accidents can be extremely serious and even life-threatening. Fortunately, there are laws in place—including the "Take the Lane" law—to help protect the more vulnerable travelers on California’s roads.

The most common motorist-caused bicycle crashes involve sideswipes. These types of collisions occur when a vehicle brushes up against a bicyclist traveling in the same direction and the driver does not account for the small gap between the two. This type of accident is almost never intentional, but that does not make them any less serious, as injuries sustained in sideswipe incidents can be lethal for bicyclists. One of the most common causes of accidents involving sideswipes is a motorist trying to pass a bicyclist in a lane that is too narrow for the action.

In many instances, a road will not have a designated bicycle lane, and, as a result, bicyclists must share traffic lanes with motorists. When this is the case, bicyclists are normally required to keep as far right on the road as possible; however, this is not the situation when substandard width lanes are involved. Substandard width lanes are lanes that are too narrow for a vehicle and a bicycle to travel safely side by side. The law requires that if there is no shoulder in such an instance, the bicyclist should ride closer to the center of the lane. This will help prevent drivers from passing bicyclists when there is not enough room.

Other situations where bicyclists can take the lane include when:

Generally, cyclists who control their lanes can be seen by drivers from as far as 1,280 feet away. Bicyclists who ride on the right-hand side of the road, however, are not seen by motorists until they are around 140 feet away. Therefore, taking the lane significantly increases the safety of bicyclists in many situations.

Breaking traffic laws can result in liability for the offender. In a situation where a driver tries to pass a cyclist when that individual has taken control of the lane, and subsequently collides with or sideswipes and injures the cyclist, the driver is presumed to be negligent.

If you or a loved one has been injured in a bicycle accident because of a driver’s negligence, please contact the dedicated San Jose personal injury attorneys at Corsiglia, McMahon & Allard, L.L.P. for a free initial consultation. Call (408) 289-1417 today.