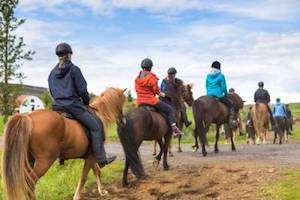 Most people realize that there are certain risks involved in participating in most recreational sports. For example, if you decide to play a pick-up game of basketball with your friends, there is the possibility that you could sprain an ankle or be elbowed in the face while going up for a rebound. In most such situations, the assumption of risk doctrine applies, which means that you cannot sue another player, coach, or official for injuries that are considered to be part of the game.

Questions often arise, however, regarding what risks should be considered inherent to a particular sport or activity. Such was the situation before a California appeals court earlier this summer, as the court heard arguments over injuries sustained during a long-distance horseback riding event.

In March 2012, the claimant and defendant were among several dozen participants in a 50-mile endurance horseback riding event in southern California. As the horses and riders began their journey, there were multiple occasions of horses bumping into the backs of the animals in front of them, according to court documents. About eight miles into the ride, the claimant got off her horse at a designated checkpoint. While she stood on the ground, the defendant’s horse bumped into the back of another horse, which then kicked the defendant’s horse and caused it to bolt. The defendant was thrown from the horse, and the animal struck and injured the plaintiff.

The injured woman filed suit against the defendant for “negligence, reckless or intentional misconduct, and having an animal with a dangerous propensity.” The trial court, however, granted the defendant’s request for a summary judgment, holding that the injured woman had voluntarily assumed the risks involved with a long-distance ride.

On appeal, the plaintiff claimed that endurance riding is a non-contact recreational activity. She argued that contact between horses is to be avoided, and, therefore, the defendant should be responsible for her injuries.

The appeals court was not persuaded. In its ruling, the court cited a California Supreme Court decision that addressed a baseball situation in which the pitcher intentionally throws at and hits a batter—an action that is prohibited by the rules of the game. The Supreme Court determined that even though throwing at a batter is “forbidden” under the rules, being intentionally hit is an inherent risk assumed by the batter as part of the game. Similarly, allowing horses to contact each other during an endurance ride should not be encouraged by riders, but contact is not unreasonable in terms of the activity. Thus, the court ruled that the plaintiff assumed the risk of dangers inherent to the activity, and her appeal was rejected.

Questions About Assumption of Risk?

If you or your child has been injured while participating in competitive or recreational sports, it is important to understand how the assumption of risk doctrine may apply. Contact an experienced San Jose personal injury lawyer to discuss your case and to explore your available options. Call (408) 289-1417 for a free consultation today.