Amusement Parks and Water Parks More Dangerous Than Many Realize 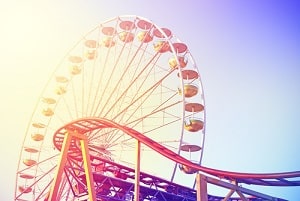 Visiting an amusement park or water park can be one of the best days of a child’s life. Parents love watching the joy on their children’s faces as they glide through the air on rollercoasters or slide down water slides. When a family visits such a park, they hope to have a day filled with fun and laughter. Unfortunately, this is not always the case. Some people leave amusement parks battered and bruised, or worse. In fact, the U.S. Consumer Product Safety Commission estimates that about 30,000 injuries and 22 deaths were caused by amusement parks in 2016.

Knott’s Berry Farm in Buena Park, California has been under scrutiny for some time because of the high rate of injuries on its rides. In August, the family of a six-year-old boy who was injured on the Timber Mountain Log Ride filed a lawsuit against Knott’s Berry Farm and its parent company, Cedar Fair. The boy was riding a log flume ride when his boat suddenly slowed at the bottom of a large hill. Because of this sudden deceleration, the boy was thrust forward into the seat in front of him. The impact was so great that the boy suffered a fractured eye socket.

This was not the first time a small child has been injured on this particular water ride. In fact, the family of another six-year-old had previously filed a lawsuit against Knott’s Berry Farm after their little girl also suffered face injuries from the ride.

A water park in Dublin, California has found itself the subject of a major lawsuit as well. Only 90 minutes into the opening of The Wave waterpark, a young boy way injured on The Emerald Plunge waterslide. The nail-biting ordeal was captured on video, in which the child can be seen flying out of the water slide and onto the concrete. He continued to slide along the concrete, causing serious abrasions and burns across his body. The parents of the boy filed a $2.5 million lawsuit claims negligence and emotional distress. The plaintiffs include the Wave Water Park and the slide manufacturer.

The waterpark’s website assures customers, “The City of Dublin is fully committed to ensuring a safe and fun experience for our customers. An inspection team, including OSHA, the manufacturer, and contractors are working to ensure the safety of The Emerald Plunge ride…The Emerald Plunge and The Dublin Screamer slides will be closed until further notice.”

If you or your child have been injured in an amusement park accident, contact Corsiglia, McMahon & Allard, L.L.P. for a free analysis of your case. Our seasoned Monterey County personal injury lawyers can help you determine if compensation is owed, and we will aggressively represent you throughout the entire legal process. Get the help you deserve by calling (408) 298-7200 today.