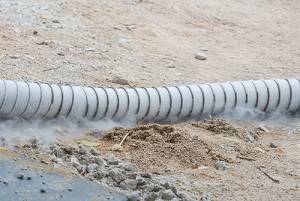 Since October 23, methane gas has been leaking at a rapid rate from a Southern California Gas Company underground storage facility in Aliso Canyon, near Porter Ranch. The leak has caused illness and disruption to thousands of people and families in the area, many of whom have been relocated to unaffected areas.

SoCal Gas maintains a 3,600 acre natural gas storage facility in Aliso Canyon, near Los Angeles, and a mile from the Porter Ranch community. In September, SoCal Gas injected about 5.7 billion cubic feet of gas into the underground facility. The following month, as they injected what are thought to be similar amounts of gas, one of the injection wells failed and a blowout occurred, causing a massive gas leak.

It is estimated that 72,000 metric tons of methane gas have leaked so far, with 1,200 additional tons being emitted daily. The leak is releasing a combination of methane, methyl mercaptan, and aromatic hydrocarbons into the environment.

Utility officials say that they have located the pipe that is leaking gas, but it could be months before they can fix it. Early in November, the drilling of relief wells began, the first step in plugging the leaking well. The first relief well is estimated to be finished by late February.

Exposure to the gas has made people ill, and families have been driven from their homes. As of December 28, SoCal Gas has provided temporary housing for 2,258 families.

Methane, the main component gas of the leak, causes environmental problems. Methane is a greenhouse gas, and the SoCal Gas leak has drastically increased California’s methane emissions. The mercaptans, which are added to the methane to give the gas a sulfuric smell in order to alert people of leaks, have reportedly caused nausea, headaches, nosebleeds, dizziness, and breathing issues in those exposed. The leak is also polluting the air and groundwater, and the long-term impacts of gas lingering underground is not yet known.

Not all gas leaks are on the scale of the Aliso Canyon leak, but smaller leaks are common. Gas leaks in homes, businesses, and office buildings can cause illness. Children and the elderly are more prone to suffering negative effects, and those with preexisting medical conditions may also be more seriously affected. Gas leaks can also cause explosions, which can result in serious burns, fires, wrongful deaths, and significant property damage.

Gas leaks can be caused by the negligent design, manufacture, or installation of tanks, valves, and pipelines. Negligent inspection and maintenance or improper repair can also result in a leak for which gas companies may be held responsible.

If you or a loved one has been harmed because of a gas leak, whether you have contracted an illness because of contamination or suffered injuries because of an explosion, an attorney can help you file suit against the responsible party. Please contact the dedicated San Jose personal injury attorneys at Corsiglia, McMahon & Allard, L.L.P. to discuss your case.